Each NatureBar soap is made from rich organic oils such as shea butter , calendula oil and locally sourced natural ingredients. This way you are not only cleaning your skin but also making the earth a tiny bit cleaner. Sustainable coffee from a local roastery is used for the coffee scrub soap.

Coffee beans are actually not beans, but seeds from the coffee berry.

The longer the coffee comes into contact with water, the higher the caffeine content. An espresso often has a higher intensity, but contains less caffeine than filter coffee. In general, the shorter the roast, the more sour it tastes. And the darker it is roasted, the more bitter the taste.

The word ‘espresso’ comes from the Latin word for ‘squeezing’.

The texture of ground coffee beans turns out to be one of the best natural scrubs there is. Exfoliating with ground coffee not only removes dry and dead skin cells, but also stimulates the production of new skin cells. Coffee contains the antioxidant caffeic acid. This substance provides a boost in the production of collagen. Collagen also ensures firm skin. So, a win-win-win situation.

Coffee was probably first noticed by humans in the Kingdom of Kaffa (c. 1390-1897), which is now in Ethiopia. Here it was called buna, bunn or bunchum, meaning “bean.” Spoiler alert : coffee beans are actually not beans, but seeds of the coffee berry.

There are several legends about the discovery of coffee as a drink. Perhaps the best known is the one about a shepherd named Kaldi. He saw that his goats had a lot of energy after eating certain berries. The shepherd boiled some berries in water and brewed the first version of coffee. The drink was bitter, but it also gave a sense of satisfaction and clarity of mind. In all likelihood, Arabs initiated the cultivation of coffee plants. Despite attempts at secrecy by even enforcing an export ban, coffee quickly became popular in most Muslim countries. The port city of Mokka became the main distributor whose coffee was transported to Egypt and Syria. Fun fact: the coffee variety mocha is named after this city.

In the Netherlands, the exotic drink was drunk by only a handful of people at the end of the 17th century. Some people even attributed magical powers to this mega exclusive drink. This is how the coffee grounds were born. From the beginning of the 18th century, the coffee houses shot up like mushrooms due to the falling price. Coffee changed from a drink for the elite to a drink for the people. From 1750 the popular drink became number one; it even knocked out beer from the top spot.

How is coffee made?

Coffee is made from the skinned, dried, roasted and ground seeds of the coffee plant. So where everyone is talking about coffee beans, it is actually about coffee seeds. The berries are ready for picking after about eight months. In those eight months, depending on the plant, they change color from green to red, yellow or orange. 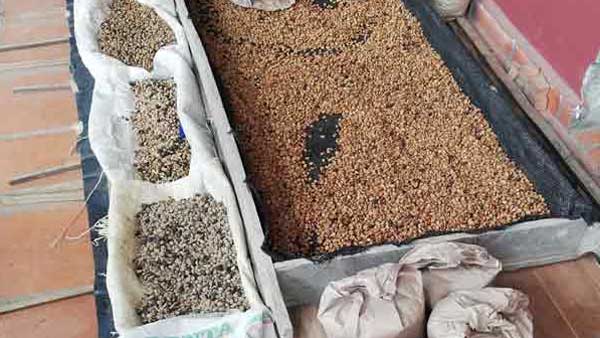 This is followed by ‘the wet process’. The berries are pressed through a grid so that most of the pulp is removed. The little bit of pulp that remains is left to ferment for about two days. The seeds are then brushed clean with a machine. Then follows the dry process. This is a very delicate process, the coffee beans dry in the sun, but should not dry too quickly. That is why they are raked every few hours.

When the beans are dried, they are brushed one last time to get the last of the unwanted skins off. Then the coffee is sorted according to different quality criteria and often “blended” (mixed). Making such a blend ensures that you can enjoy the same taste for years, while the harvest can differ greatly every year.

Impact of the coffee industry

On average we drink about 3 cups of coffee a day. All in all, this has a huge impact. Do you ever think about where your coffee actually comes from and how the coffee is produced? We often easily assume that the production of our food is all right. After visiting a coffee plantation, I know that there are still many abuses in the world of coffee, and that there is still a lot to improve upon.

Did you know, for example, that toxic pesticides are still widely used in Brazil? This is not only bad for the workers – who have no protective clothing – but also for nature, because the pesticides easily end up in the groundwater. For example, people who do not work on the coffee plantations also come into contact with the toxic substances.

Pesticide manufacturers cunningly convince small coffee farmers that they really need them. They only ‘forget’ to say that it is almost impossible to produce again without these resources. The resources exhaust the soil completely, and the plant also becomes highly dependent on the resources. As one Colombian coffee farmer explained: “These plants are addicted like a drug addict. If I give them enough they will continue to function properly. If I suddenly don’t give them anything, a large part of the plants will not survive.” It takes years before the soil is nutritious enough again, and the plants themselves are ‘knocked down’.

NatureBar chooses to only work with coffee that has been produced in a sustainable way.